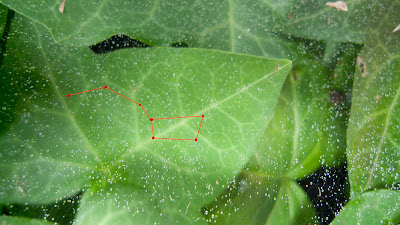 August 13, 2011 – This was the forecasted day when the 2011 Perseid Meteor shower would reach its prolific peak, and it brought me to the search for the best location to watch this in my New Jersey neighborhood.  Atop a hill I stayed vigil in the pre-dawn to sunrise hours for this, but the experience was less than stellar because of light pollution.


But magically, by dawn, this experience of lack was compensated by my visualizing of similarly impressive phenomenon: not from above, but from below; not stellar, but earthly; not large and expansive, but small and measured.  The dawn light illuminated to me that the meadow I was standing vigil on was covered with sheets and sheets of funnel spider webs glittering with thousands of dew orbs.  The experience of space that I lacked earlier had been replaced by a dewy and spiderry one by my feet.  Had the conditions been favorable I would have experienced 2 different notions of constellation within a matter of 3 hours.
Constellations are these stellar patterns that have been watched, observed, read, measured and contemplated since the dawn of humankind for various purposes.  During antiquity they helped in navigation and agriculture before being replaced by later technological devices.  At the same time –and even in the present- their distance, mapping and connections are the material of myths, legends and poetry.
But because constellations inhabit this space outside the confines of our planet, there’s always been this otherness to them.  It has been Other from the time that humans walked the earth. It is still Other today - a surprising notion since there’s been reasonably sophisticated accomplishments in the level of spacecraft and space studies within a teeny tiny fraction of cultural time.
My guess for its otherness is we -as conscious beings bounded by the imperatives of our dimensionally solid and stable bodies -there is something in us that finds more security in the tactile attainability of things.  Despite the vastly proven equal power of other sensate presences (sight, sound, smell and taste of a thing), touch often gives a final say in the confirmation of the stability and believability of things.  Hence we have this category that covers these things that possess otherness, the enigmatic, mysterious, and unknown – a category that we associate with what lacks a physically defined, attainable and measurable body.  Space belongs to this category.  And so do belief, feelings, thoughts, memory.
With those last 4 things just mentioned, this category is therefore powerful.  But its being a power lacking tangible body makes it also threatening.  And so our history will show us that a great bulk of it contains chronicles of our efforts to assign some tangible or measurable form to these enigmatic things –efforts to eliminate our fear and harness their power. And so structures have been built, sculpted, painted, written, drawn, drafted to map, organize, and put them all in place with us.
But that putting into measurable form is merely one strategy of dealing with the category of the enigmatic.  Surely there are several, but one I find more compelling, compassionate, and less driven by a fear factor is analogy.
Analogy could also be employed in form building, but intrinsically it is driven more by our human desire in making connections.  In her impressive book Visual Analogy, Barbara Maria Stafford wrote, “Perceiving a lack of something- whether physical emotional, spiritual, or intellectual- inspires us to search an approximating resemblance to fill its place.” (p2)
With analogical thinking, there’s no imperative to make structures to put the formless enigmatic in place; instead, through some connection or approximation, we can link it to something that already exists, something we know and possess, so that the link between them will grant us this oscillating knowledge and understanding of their similarities and differences without subjugating their distinctive qualities.  With analogy, the enigmatic keeps its indecipherability, but it is illuminated by our lived experience and knowledge of what we already have.  With analogy, the impenetrability of the enigmatic is replaced by coherence brought by its resemblance to a thing we possess, or a certain quality of that thing.
With analogical thinking the constellation above me on those pre-dawn hours of August 13 is no longer as remote and unattainable.  The constellation on the spider web on the meadow I’m on gives me a visual likeness that is enough to close the distance between myself, the constellation-like web below, and web-like constellation above.
For more on analogy, check out Stafford’s book-it’s awesome!
Posted by katrina bello at 4:25 PM