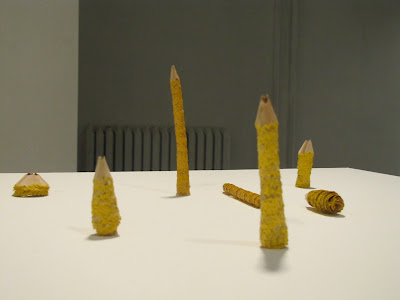 Among her pieces shown, the one titled “Peeled”, which consist of used pencil shavings, ask the reason of why was this done. It shows the previous life of the pencil as if an object had a life but how does an inanimate object have a life?

It is greatly interesting to see the pieces of the pencil shavings being put back together to create the new discombobulated Frankenstein creation of what it once was however. The visual design the line of each layer creates is very textural and snake like in appearance. This was definitely one of my favorite pieces.

I have always enjoyed artwork that is interesting and fundamentally interactive. Caroline’s art work captured me as the viewer in its space. The way everything was set allows me to be physically be immersed within their world.

Each of the pieces shown were set in a way where they were separate functional works of art that made you step around or through them which I highly enjoyed. I have always found that sculpture is not always just meant to be seen from one point of view but the entirety of it. It was great to understand the spatial structure of her work which in corporates the objects around them.

There were a wide variety of different techniques used by Caroline. On top of the series of sculptural objects she recorded a video of her work showing the futility and tediousness of her process. That in-it-self feels more of what she was going after.

“I attempt to show the absurdity and futility of my repair & reconstruction process, but ultimately creating a whimsical and humorous collection of objects that also speaks to the materiality of many of our second hand and discarded objects.” – Carol Mak

I agree perfectly with her description of her work. In an instant I noticed many of her materials used and related them to what I knew. I found a lot of it to be uplifting.

The show is still going on until October 23’rd, be sure to check it out.