Color is a proposition that I dabbled into from time to time.  It’s not because it’s an insignificant aspect of what I’m doing, but because it’s the opposite.  Questions about color – formal, historical, conceptual- are matters that are grave, crucial and utterly comprehensive.  Color is an aspect so serious and confident in its own position in all practices that it doesn’t flinch in discomfort when it’s the subject of conversations that depreciate it.  There have been many writings in the past that dismiss it for its light and flippant nature.  Yes, color is light, but I cannot stand by the flippant part.

That said, perhaps light and flippant are a good place to start a certain thinking about color.  And what better embodiment of both words that to do this in the form of lists.  Lists are casual and inconsequential. Lists are fun!  Lists are tyrannical.  And Umberto Eco said that lists are primitive, they create culture, and we like it for the assumption that it has no limits.  He said we like it because we don’t want to die.

So how about we do the list in an equally unlimited form: in numbers!  But for now here’s a short one:

7 - the number of spectral hues that light was split into when passed through a prism, as discovered by English scientist Sir Isaac Newton

6 - the number of spectral hues that Newton may have actually discovered, according to some claims.  One claim is because he's linked to Mysticism, he might have chosen 7 because of the mystical properties tied to the number.  Another claim is that 7 corresponded to the musical notes of the diatonic scale.

1704 - the year that Newton's Opticks was published, a manuscript notebook where Newton suggests a correlation between the color spectrum and the musical scale. 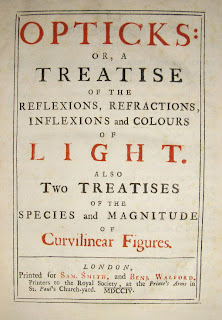 207 - the number of years after Newton's published Opticks, when Russian painter and art theorist Wassily Kandinsky published his Concerning The Spiritual in Art.  For Kandinsky, the correlation between sound and color was a lifetime preoccupation. 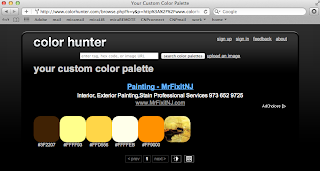 3,361 - the number of likes for The Color Hunter page in Facebook (as of today's date)

13,809 - the number of likes for The Color Purple book/musical page in Facebook (as of today's date)

200 - number of years later in China, when Mi Se was being produced and reserved for only the Emperor to see -let alone use.  It was speculated to be a kind of porcelain with a shade of green.  Mi Se means "secret color." Speculation went on until 1987, when a secret chamber was discovered in the ruins of a collapsed tower, that scholars were able to identify some genuine examples of the legendary porcelain.  They had been locked away for 11 centuries

1701 - the year French baroque painter Hyacinthe Rigaud painted a portrait of Louis XIV wearing coronation robes and a pair of red-heeled shoes.  It was a period when red heels were worn only by the nobility. 1911 – the year that French painter Henri Matisse painted The Red Studio, and saying about it: “ Where I got the color red –to be sure, I don’t know.”

1949 – the year that Russian-American painter Mark Rothko stood in front of Matisse’s The Red Studio everyday for months following it’s acquisition by the museum of Modern Art. He remarked at the red field of color, ‘you became that color.’

No. 21 -  the title given to one of Rothko’s paintings in the same year that was presumed to have been made under the influence of Matisse’s The Red Studio.  Not long after, he will make the painting titled Homage to Matisse

22,416,000 – amount in dollars in Nov 2005 that Christie’s set as realized auction price for Rothko’s Homage toMatisse

80 - the number of metric tons of the color red that was shipped to Spain in 1575 from the New World.  It became known as the cochineal fleet.  In addition to finding gold and silver in the New World, this was another treasure the Europeans found. It is a particular intense red -carmine- made from the blood of crushed female cochineal beetles.  A demand for it was born in Europe: for cosmetic fashion, carpets, fabrics.

70,000 - the number of female cochineal beetles needed to make 1 pound of carmine dye.

E120 - ID number of color additive to Cherry Coke.  It is carmine dye from the same cochineal beetle.

1000CE - earliest estimated date of the cultivation and use of cochineal beetles inthe Toltec era of archaeological Mesoamerican culture.

20 - number of sacks of cochineal from conquered peoples that was annual tributerate due to Montezuma II between 1480 through 1520.  Indigo was also alsopart of the tribute.

20 - number in the millions, in tons of indigo are produced annually for the purpose of traditionally dyeing blue jeans

3 - number of years in duration of Picasso's Blue Period, taking place between 1901 through 1904.  During this period his subject matter consisted of the poor and outcasts, primarily painted in shades of blue and blue-green, and it is recorded he suffered bouts of depression.

3 - number of years in duration of Der Blaue Reiter, formed in 1911 in Munich as a loose association of painters led by Wassily Kandinsky and Franz Marc.  Kandinsky wrote that the name isderived from Marc's enthusiasm for horses and Kandinsky's love of riders,combined with both love of the color blue. For Kandinsky, blue is the color of spirituality: the darker the blue, the more it awakens human desire for the eternal

1873 - the year when Hermann Wilhelm Vogel produced the first orthochromatic films, sensitive only to blue light.

2009 – year Springer publishes a coffee table book Why Do Architects Wear Black?  One of the answers: “ ‘they are mourning their many unrealised projects.’ arno brandlhuber, berlin.” 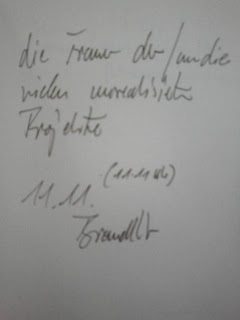 2012 – year when a painting from Rothko’s “Black on Maroon” sequence was defaced at the Tate Modern in London.

77AD – year Pliny the Elder wrote his encyclopedic Natural History.  It contains the basis of the Western classical legend that the first paint was black, and the first artist a female from the town on Corinth in Greece. Victoria Finlay ruminated on this on page 71 of her book Color 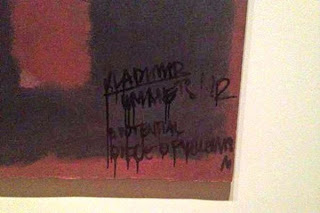 Feel free to add/edit on to the list if you're feeling Eco's thoughts.