It used to be, before the internet, that if you had heard a song somewhere, or a friend made you a mix tape with no papers, you might go years without knowing whose song it was. You would memorize the lyrics. I used to tape off the warping records (steam heat in the media room of the Morris County Public Library) and then not write down the names of the tracks. I'm not a musician, (or a hipster.) But I like spaces, corners, spatial relations. I'm a photographer of buildings. One of my major goals is to take a really great photograph of a corner someday. And I often think about the pictures as either poems, or songs.

You can stop gagging now.

I simply mean that what would satisfy, what would count as a good day's work for creative output- I want it to have the qualities that I find in, say, a Kevin Young poem's near rhymes, or the haunting quality of a live recording, by Champion Jack Dupree, of Frankie and Johnny. I didn't know who had sung this version, not for years. I just knew I liked it, how the sounds of a room were in the track, the sound of glasses or bottles, the way someone, probably a woman, yells towards the end. It makes me think of echolation, in water.

The room is in the track.

If you can put aside larger cultural debate on Robert Johnson for a moment, you have to admit that all the craziness with figuring out whether his tracks were sped up is amazing nerdery- they are remaking the room, inhabited by ordinary mortal breath.

I love cheap wordplay and I love covers. Forget Lord of the Rings, give me "Dempsy," which reads to me as a pastiche of Jersey City and the South Bronx, created by Richard Prince. I love the scene where high school kids make their own version of Spoon River Anthology but set in Dempsy, where they live.

Back to Robert Johnson.

E, who had a trust fund and thus was always coming up with criminal schemes (the edge is safer with a cushion) out of warner brothers, used to play a wonderful cover of Come on in my kitchen. He was very shy about playing in front of people, like it was obscene. He stole from us later, but that's another story.

Anyway, R., his friend, would say, "accidents happen", as he skinned rats from the apartment building. He was from the country originally. I have two pelts, the little feet are articulated so well. He would say that, but that was before he fell multiple stories onto his head, went to Bellevue, and now is a different person. When I first met him, we were listening the Ramones, I sometimes think of him when I hear Cretin Hop, though in some ways that isn't funny anymore. But really, that was the song that was playing, I swear. For some reason I always remember what song was playing when I meet people. Cretin Hop makes me think of summer, and Coney Island. Where it isn't snowing, because it's a memory and I can have it any way I want.

Coming Back to Newark!

What a happy soul you have made me, Aferro comrades! Thank you. I looking forward to coming back to Newark and working hard at Aferro. Emma's idea of artists' books intrigues me greatly. It's snowing up here in Providence. A real winter.
Posted by Nell Painter at 8:31 AM 1 comment:

The unitednationsplaza archive is now online. Missing from the "night school" section, though, is the lecture by Walid Raad, No. 10, which was provocative and poetic. Adjectives, adjectives, I know. But it was. He described a scenario where authorities might instigate the creation of a art spot that would be open irregular hours and appear, in every way, to be avant, underground, etc... 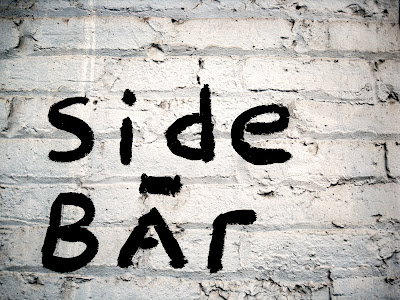 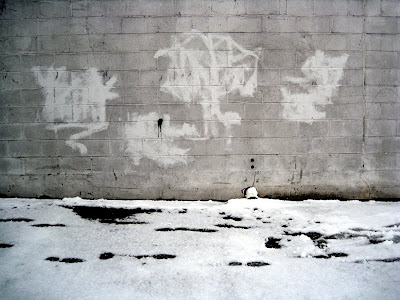 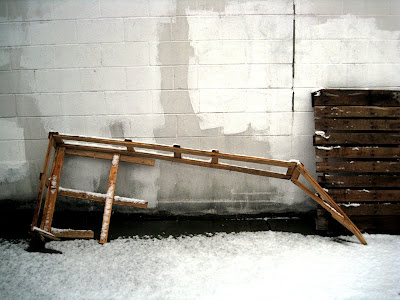 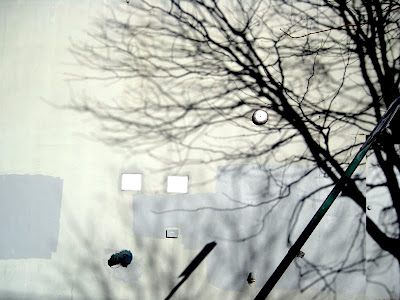 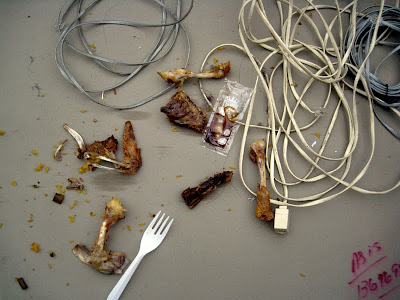 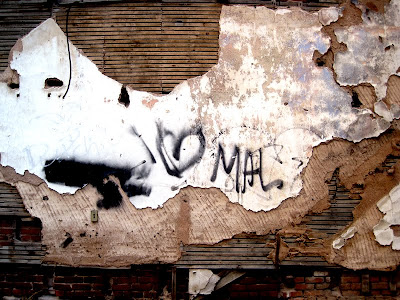 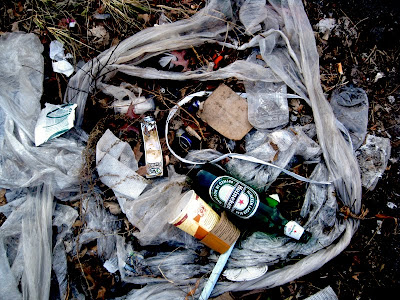 I have applied to be an ArtReach mentor this year. I will be thrilled to be accepted, while I am of course busy I feel a significant debt to the sundry and various people who have helped me since I was a teenager. It would be great to try to pay some of that back in.

One of the ways in which mentors may work with their students in in studio assistant mode (old school!). In the case of my practice, the most pressing need in my studio is to wash and de-label my pint bottle collection, which must be damn close to 1000. This seems kind of unseemly though. Many art materials are "messy" and might require an apron and gloves, but not all art materials are loaded with specific signifiers, like say, a bottle of cheap fortified wine is. Probably inappropriate. But this is what I need help with. Do not want to be a thoughtless mentor.
Posted by Emma Wilcox at 8:43 AM No comments:

My output at the end of the Newark Museum residency was a powerpoint I had created by retyping and collaging (zine copier style) different sentences, paragraphs and text fragments from manufacturer directories of Newark, mostly circa 1850-80, and many eras of histories of Newark, including books for children. Will get into why I work with specific time periods later, not in this post.

Anyway it was supposed to be a short film of sorts, allowing me to emphasize pauses and certain words to make a different, more doubtful and subversive narrative about my old standbys, failure and expectations. I can't say I succeeded. There is plenty of bad text art out there, and as a photographer the tension in working with words (which I love doing) is always there.

How about a palate cleanser?

However, I am bound and determined to try to make an artist book from these 2009 efforts. There is always so much text and reading behind every picture I make, it would be nice to show some of the source material. I've proposed to the Print Center that I work with an old, early survey of Newark, which is a beautiful piece of language. The last time I wrote about working with them, I was promising to grow things. The seeds grew sprouts, but I didn't get them into the ground in time. Going to try again this spring. I know, promises, promises...
Posted by Emma Wilcox at 8:26 AM No comments: 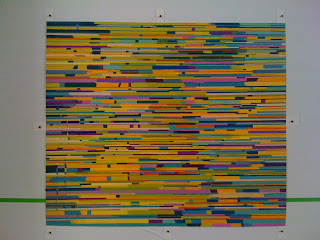 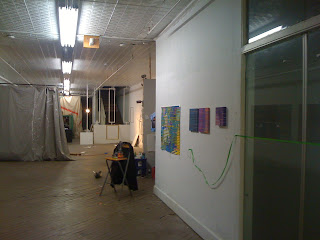 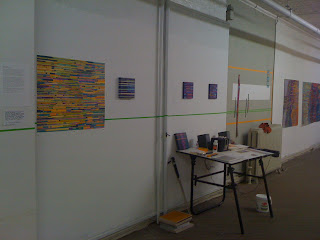 and we are not a burden

(The above is an excerpt from the text for the artist book I’m working on.)

The past few months have been amazingly productive for me. The atmosphere of working at Aferro and living in city have created for me an incubator of thought that has been profound. I’ve had the opportunity to meet and work with some of the most committed and thoughtful people I’ve ever known, really an inspiration. Seeing the commitment of Evonne and Emma … and then making new contacts through friends and people now becoming friends … all of this has afforded me remarkable opportunities.

Working with Margret Hjaltested, Malina Rauschenfels and Melissa Bybee has opened up tremendous possibilities in the sound for my pieces. All accomplished musicians, they’re incredibly generous in their time and energies. These connections would not have been possible had Aferro not given me the opportunity to participate in the residency.

My project, “What Persists”, has unfolded in ways that have informed all aspects of my work. The content and visual connections between sound, video, painting and writing have revealed themselves in a way that now I feel my work makes sense as a body.

All of my work productions stem from the understanding of reading and writing. Everything is a text of fragmentary information. We read and fill in the gaps, imaging the bigger picture, giving ourselves a means of understanding. It is why two people to do not, cannot, see the same painting, cannot read the same book, or even hear the same sound. We cannot meet the same person. Each approach fills the gaps differently. This is the home of wonder.

What persists? A infrastructure of meaning … a screen onto which we project … experience … and wonder.

The work continues and I can’t wait to see how it continues to develop from here.

--
so far - production – Extending from my so far while here I’ve produced a number of paintings and completed four videos with sound pieces. Two of the sound pieces were done for me by Malina Rauschefels. I’ve also made good progress on the text for an artist book, although this part of my project is perhaps not as far along as I’d like. In the end I foresee an installation centered around one or two of the videos.
Posted by laney2217 at 10:39 PM No comments: