The project I've been working on at Aferro has been ruminating in my mind for a couple years.
The springboard for this piece came from looking at Chuck Close's 'Big Self-Portrait'.  I did a smaller version which was to serve as a template for the final work, but didn't have the space until now to see it through.  The small version was in included in a group show, 'Nonsense', curated by Jill Wickenheisser at Seton Hall Law.
As an artist, I sometimes struggle with the idea of 'am I good enough?'  The attitude Close conveys in his work embodies confidence and defiance at a time when Clement Greenberg had said there's only one thing an artist can't do any more and that's paint a portrait.  While I would like to channel more of Close's self-assurance in my process, the image I wanted to create with this piece was one of naive wonder.  The image comes from my class portrait sometime around 2nd or 3rd grade, with these colorful cellular blobs making their way in from previous paintings.  The eyes I incorporated were Spongebob's; being that I have two young sons, and that seemed to be all that was on our tv for awhile.
﻿﻿﻿﻿﻿ ﻿﻿﻿﻿﻿﻿﻿

Walking into Gallery Aferro for the first time, well technically the second, I was intrigued. The awkward green floors, large white walls filled with color, and warehouse ceilings somehow made it an incredibly charming space. 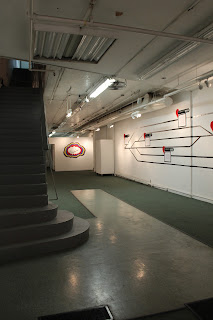 I wanted to explore everything- so I did. Once I took a lap of the first floor, I needed to see what was up the gray staircase that had caught my eye the moment I walked inside.  The upstairs was just as funky and charming as I had hoped. It had soft lighting, and was very intimate. The art felt like it was encompassing the room; it felt like a space you could lose track of time in. 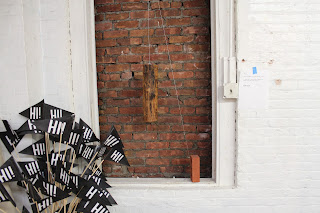 After walking through both gallery floors, I continued onwards and upwards to the studio space. Being a painter, I thought the studio space was amazing. The character of building paired with all of the art being created was inspirational, to say the least.  I felt like every space in this building was holding a little something new, and unexpected.

...By the way, I am the new curatorial intern at the gallery! I'm a painter, and hoping to gain some great experiences here. I'm looking forward to working at Gallery Aferro and meeting everyone!

Posted by Unknown at 5:13 PM No comments:

This post was delayed due to Hurricane Sandy. Hope you and everyone you know braved the storm well!

Maybe it's my own negativity, but I think we've all been guilty of this: Cynicism, when going to view art. We go to the galleries expecting to see a lot of crap, a good amount of decent work, and every once in a while something that you really connect with. A few weeks back, during my visit to the Elizabeth Foundations Open Studios my cynicism was turned on it's head. I can't overstate this, everything I saw was good. Maybe I just had an easy going day, maybe my mind wasn't in criticism mode, regardless, all the work I saw there was beautiful and moving. Another form of cynicism (especially when going to view work in Manhattan) is the tendency to expect the studio/gallery sitter to not really care about your existence. It always seems like such a painful task to ask the gallery attendants in Chelsea for an artist statement if the pile of print-outs has ran out. As I walked in to the studios I was consistently greeted by the artist or sitter and they wanted nothing more than to inform me about the work and enjoyed talking to me about the pieces in detail. It felt like I was at Aferro where we all know each other and when you walk into the other person's studio it feels more like a conversation with an old friend about their art than someone I've only known for a few months.

Now, there was a few artists I would like to talk about specifically but I wrote that opening paragraph because I want to applaud and thank the EFA for not only choosing such great and friendly artists to give studios to, but also for putting together such a great open studios that was nothing but enjoyable.

There were two artists that I knew before hand and were excited to see, Bryan Whitney and J.C. Lenochan.

J.C. is a great guy and his work is just as awesome (and is pretty well known in the Aferro world). He has a large installation at the Mason Gross Galleries in New Brunswick right now at 33 Livingston Avenue. Although I haven't made it over to New Brunswick yet, I'm planning on going soon and you should do the same. Here's a link to his work and info about the show at Mason Gross:

Bryan Whitney was a teacher of mine at Mason Gross. He taught me 4x5 and digital processing. He was really a great teacher to me and it was so nice seeing him. I know it's not at all fair to only talk about people I know (my favorite work of the day was someone I had never heard of) but Bryan's negative images of cell phone towers are just fantastic. The quality of his prints can't be overstated, and the idea of the negative is something I've been thinking a lot about lately (especially due to Geoffrey Batchen's guest blogging at http://blog.fotomuseum.ch/). The work is stunning, surgical, abstract but still representational. Just great, and any fan of the Becher's will be immediately drawn to his work. His website has the still frames but he also had on display a few stop motion videos of the cell phone towers and they were absolutely stunning. They're hard to describe exactly, tiny motions of the shadows, stark white stillness of the towers, and the fluid grazing of the clouds made for a hypnotic experience. His work can be found at:

So, enough about the people I know. If all the art was so good as I said it was, I should of discovered a plethora of great work, right?

Right. Quite a few artists either didn't have a card for me to take away or were too busy talking to other people for me to really interact, so I apologize to all the artists who's work I enjoyed but I can't point out specifically.

Some I can point out specifically is the work of Saya Woolfalk (Sayawoolfalk.com). She has shown at the Newark Museum (she was also an artist-in-residence at the Newark Museum) and currently has a solo show up at the Montclair Art Museum. Noah Klersfeld's (noahklersfeld.com) video installations were absolutely entrancing. I must of spent 10 minutes just staring at each video. One of the videos, with the wire fence and the red background, was really beautiful, I mean, stunning. Hypnotic, abstract, graphic, mundane AND exciting (all at the same time). Noa Charuvi (noacharuvi.com) was another great one. Her work was very socially and politically charged but didn't scream in your face (and the way she paints is fantastic). The work is powerful and beautiful at face value, and once I spoke with her and understood her thought process, it just got better and better.

Now for the big reveal, my favorite work of the day. Morgan O'Hara (http://www.morganohara.com/). Her work absolutely blew me away. Maybe she has an unfair advantage in my books because I love gesture drawings so much, and her series on John Cage is so relatable to me since I'm also a musician, and that she also did drawings of photographers. It's hard to put in words and I like it that way. Her work is just so moving to me, it's not about what I think about it, it's what I feel about it. I see the musician moving their hands, the photographers focusing their lenses. I can imagine the music and the feeling of playing the notes. She articulates the aura of the music, the experience. It's not photographic in its documentation, it's guttural, ephemeral, intense yet subtle, ultra specific yet unrepresentative. The work is everything you want out of heady conceptual work while fulfilling the want of simple, unadulterated beauty. Sorry Bryan, sorry J.C., sorry everyone else at EFA, Morgan takes the cake in my book. Before leaving I had spoken to her about drawing someone working with a 4x5 camera (as opposed to the paparazzi type photographers she had previously drawn) and I hope that I might have sparked some inspiration in her. I would love to see how she depicts the much slower and delicate process of 4x5 photography and look forward to following her work in general, 4x5 drawings or not.

So, all in all, I was overly impressed with the work, more than excited to see Bryan and J.C. and absolutely stunned by Morgan O'Hara, as well as the other artists I mentioned. Next year, I'll bring my camera, and take notes, and hopefully I've convinced everyone reading this to go next year as well!
Posted by Jacob Mandel at 4:02 PM No comments: