What is it like to lose oneself in the image?

"It's more a nursing of an image that haunts me, and letting it sit and breed in my mind…"

This is the reply given by artist Robert Gober in a 1993 interview when asked about the strangeness of his work where he sets up his sculptural objects in what he called "dioramas."  Whether it is a section of a body -such as a man's leg- that appears to be sticking out from a white wall, a disembodied torso-like object that is half-male half-female flaccidly propped up, or the distorted cribs that he calls "traumatic playpens,"  I get a sense that something traumatic was witnessed or felt- so much so that no amount of verbal complexity could pronounce it, and that the only recourse is to transform the experience into a highly sensuous and physical reality.  His installation of sculptured objects qualifies as that reality.  And it's a reality with an overarching sense of loss.

And so in matters concerning works of art, when I hear the word "lose" and "loss," Gober's work is the first thing that comes to my mind. But he is merely one among many artists throughout history who have broached the subject of loss.  As long as radical shifts occur from one cultural, social and political movement to another, perhaps it is reasonable to think that the artist who happens to stride that shift cannot help but feel and internalize the kind of aesthetic, theoretical and symbolic earthquakes and aftershocks that come when their meaningful contexts undergo frenetic transformation.

There's Nicolas Poussin painting his "Et in Arcadia Ego," living in a time of religious conflict and excessively increasing monarchic authority in Baroque France, and so his execution of this painting must be in acknowledgment of the lost virtues of the restraint, rationality and order of the classical Greco-Roman past.  And of course, there's Edvard Munch who painted "The Cry," one of the most iconic paintings that emerged from Modernism- an almost unbearable, anguished and visceral scream from one whose psychic life cannot cope amidst the dramatic industrialization, urbanism and resulting loss of social cohesion that defined modern life.

Even I myself am implicated in the use of loss as premise for some of my own work in the past- through the subject of nostalgia and displacement- as I tried to locate myself geographically, and subjectively into the new country I had immigrated to.

And not to mention Postmodernism! With defining qualities such as skepticism, unease, doubt, and excessive self-criticism and consciousness, what is ultimately lost in the postmodern condition is faith.

"Loss" and "lose" -not only are they carriers of negativity in the verbal sense, but even numerically.

Can "lose" and "loss" ever mean otherwise?  Can their implications be reversed to potentially uphold a narrative of positivity, and in turn uphold some value that we desire to attain?

Because when values are the matter of discussion, it is "gains" and the "victorious" that we are conditioned to believe as worthy of our attention. We live in a culture fed into by the cult of the victorious, and in so far as this is concerned, anyone negating its treasured values will find themselves sectioned off into the outskirts of the glorified arena of perpetually competitive unrest.

But what if we disconnect "lose" and "loss" from its widely accepted set of implications and locate it in some place where it can, sort of, shine.  On the other hand, "loss" already exists as a virtue existing with the varied scriptural, mystical and societal values of humility, charity, and self-sacrifice.  So perhaps the conversation here is to carry on the idea of "loss" as a virtue with a potential force and systemic usage as that of the "victorious."

Having said all this, in the impulse and the desire to lose oneself in the image, what is lost and where does the transformation lie?  Assuming the image is a visual or mental embodiment of our ideals, desires, beliefs, fears, ambition and so on, and at the same time also keeping aware of the inability of the image to uphold a stable meaning, to "lose" oneself in the image would be the greatest act of blind and ultimately romantic heroism.  To lose is already an act of privileging the other, perhaps out of a greater love for the other than for oneself.  But to lose to something that is fleeting, something that is an abstraction, something that is a mental construction, something that may or may not exist, something whose meaning and loyalties may fizzle off or lean elsewhere- to lose in this manner is the grace through which our completion and becoming mysteriously take place in the heroic act of our forced self-incompletion.

Patrick Bateman, in the utter and complete surrender of the self to the image (American Psycho, director Mary Harron, 2000)

what can bleed through on truth? 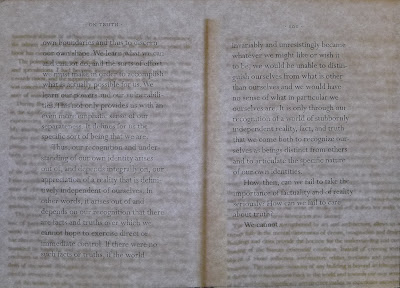 Posted by katrina bello at 8:09 AM No comments: 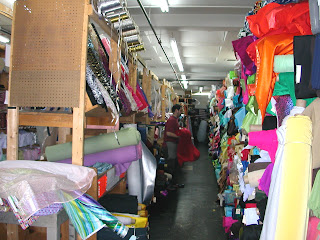 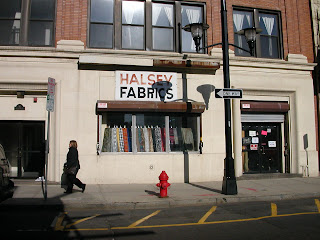 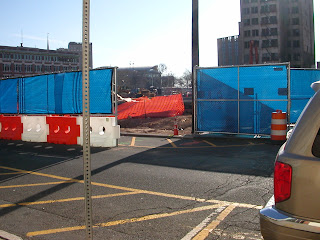 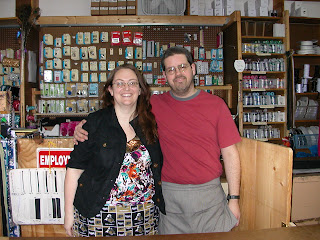 Halsey Fabrics is located at 91 Halsey Street in downtown Newark. I work with fabric to make sculptures and whenever I was in Newark I would visit Halsey Fabrics to get inspired. When I found out I
was going to have a studio at Gallery Aferro as part of the Studio Residency Program I stopped by the store. I asked an employee there if they knew of a hardware store near by. The employee spent 15 minutes researching and writing down names of hardware stores for me. Halsey Fabrics as well as having wonderful fabric has excellent customer service. Recently I asked the employees at Halsey Fabrics if I could interview them for this blog.
I interviewed Mike whose father and grandfather started Halsey Fabrics back in 1959. Mike and his wife, Jane now run the entire business themselves. Halsey Fabrics is open six days a week from 8-4 on Monday, Tuesdays, Thursdays, and Fridays, on Wednesdays from 11-4, and on Saturday 10-6. In addition to the store hours Mike works after hours to pick up the fabric at Port Newark. The store has a large assortment of fabric as well as upholstery, trim, thread, needles and anything you would possible need to sew. If you stop by later in the day or on Saturdays the store maybe crowded but unlike many other fabric stores it is organized and easy to walk around to find what you need. At the counter Mike and Jane are experts in giving advice on how much material you'll need or what color would work, and can can give you pointers on how to make your outfit, and what tools you need to use to make them. Mike told me they have many loyal customers that continue to come back year after year. The biggest obstacle though to the business is the parking situation. Mike said that people are driving into Newark now rather than taking the bus and there are few parking spaces, and you have to pay for them. People aren't willing to pay for parking and then spend a few dollars at the fabric store. More and cheaper parking would be a big help to businesses in downtown Newark. Running a mom and pop store is not easy. Mike keeps the prices as low as he can even though he has to pay higher prices for fabric. He wants to keep his customers happy. I asked Mike about the demolition of the buildings across the street and he said if they eventually have to move they will stay in Newark or the surrounding area.

Posted by Patricia Dahlman at 7:33 PM No comments: