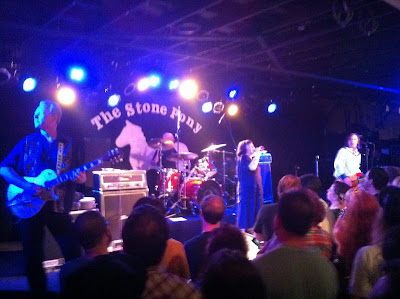 This is for the perfectly timed X theme...
X performing in Asbury Park, sounding amazing.
Posted by Dahlia at 9:50 PM 1 comment:

the body is our tool/wanting to see it 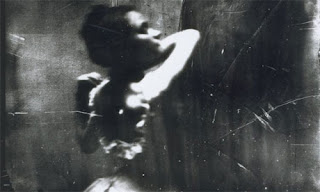 Ballet dancer Sarah Lamb on Degas. I like how she notices imperfect dance pose but acknowledges the possibility of either a changing art form or a tired dancer.

Wanting to see it:

I sometimes want to see representations of artists on film, and often am irritated with what I find. As with other subcultures (forgive the use of this term please) I think we sometimes embrace so-so movies because they at least represent us. (I can practically hear John Waters saying, and why should want that from the mainstream anyway???) What most of my students are exposed to are the music biopics, ie Ray, Cash, etc. Going back a bit further, Coal Miner's Daughter is a guilty pleasure. In all, the trajectory is tidied for maximum plot arc.

Specific to my medium, I'm always looking for good depictions of 4x5 photographers. And if for the purpose of this post we exclude both the super obscure and the documentary, where do the large format artists show up in the mainstream? I have to say, at least Jude Law's psychotic photographer character in The Road to Perdition was using his gear correctly.

Can anyone think of depictions of artists on film, dead on, terrible, or otherwise?
Posted by Emma Wilcox at 6:41 PM No comments: 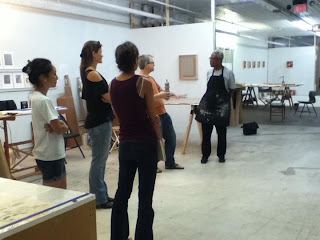 1st group crit by the Fall/Spring 2011-12 Studio Residents
Posted by katrina bello at 8:40 AM No comments: 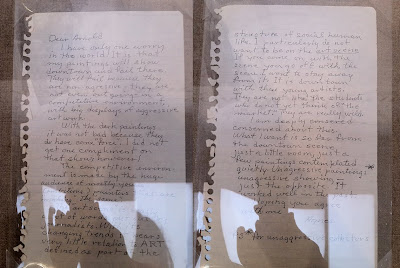 This letter is on display at Pace in the Agnes Martin Grey Paintings show.

I have only one worry in the world! It is that my paintings will show downtown and fail there. They will fail because they are non-aggressive – they are not even outgoing – in a competitive environment, with big displays of aggressive artwork.

With the dark paintings it was not bad because they do have some “force.” I did not get one compliment on that show, however!

The competitive environment is made by the huge audience of mostly young (ambitious) painters that are “making” the “scene!”

The “art scene” is really a lot of words put out by journalists. With its changing trends it bears very little relation to ART defined as part of the structure of social human life. I particularly do not want to be on the art scene. If you come on with the scene you go off with the scene. I want to stay away from it. It is downtown with these young artists. They are not like the students who do not yet think of “the market.” They are really wild.

I am deeply concerned about this. What I want is so far from the downtown scene, just a little room, just a few paintings contemplated quietly. Unaggressive paintings* unaggressive showings – just the opposite. It worked well in the past. Hoping you agree with me.

PS: * for unaggressive collectors
Posted by Dahlia at 4:32 PM No comments:

Faith exists in a vacuum. It’s the invisible we see, the nothingness we grasp, the silences that sing to us in all this terrible emptiness.
The Word became flesh to take on the sins of the world - - -and somehow complicated things a little. Jesus Christ was a ghost in a shell, a human embodiment of the divine. But he also embodied a schism - - - supernatural/natural, body/soul, spirit/flesh. His physicality became the seeable, the graspable, the audible. The corporeal made corporal. And everything made in his image and in his name gains this totemic charge - - -the statuaries and rosaries and holy oils. But it’s not as if Catholicism is riven by all these polarities, more like it feeds off them, it’s faith as talisman and ritual - - - visceral, theatrical, sensory. And tactile - - -there’s this mania for the tactile. Something to touch and be touched by, if you will, manifested in this almost hysteric exuberance, this mad ecstatic frenzy. It’s as if the commune between human and divine had taken on a tinge of the carnal.
Who knows where devotion ends and hysteria begins - - -and is there a difference between the two? But could there be more than just some pidgin iteration of faith here? More than just blind fealty? Could there be,perhaps, a genuine and deep-seated longing? Touch these facsimiles of divinity and something happens - - - a transfer of energies, a crackle of transcendence, a brush with divinity itself. In their profound hollows exist vacuums, after all. These vacuums that are the muck of insatiable mysteries. Imagine what awaits anyone tapping into them. What invisibilities we’ll see, what nothingness we’ll grasp, what silences will sing to us.
Fervor: A Study of the Black Nazarene, 2009-2011
a collaboration by Katrina Bello (video) and Dodo Dayao (text)
Posted by katrina bello at 11:36 AM No comments:

in the interests of sharing ...

one of my various projects ...

This show looks great, and features alumni Anonda Bell.
Posted by Emma at 1:27 PM No comments:

People are always asking artists about real estate. If I start talking about this I'm going to have to talk about Richard Florida, and I'm not up for that today. But I'm happy to share this interview with alumnus Walter Zimmerman.

"The challenges, I think, arise not from the locale, but from larger cultural biases, prejudices and misconceptions about art and art-making. I call it the Van Gogh model — the idea that artists are unstable and that their art is a product of that instability. To the contrary, I think art is a manifestation of great mental and physical vigor and coordination, and I find making art to be a grounding, sanity-saving activity."

My father worked in the logging industry when I was a child. He was one of eleven children from a Catholic family in rural New York. In some ways my father was a difficult man, in other ways he was kind and light hearted. My father had large, hard hands. The deep calluses and meaty fingers frightened me, I did not want my hands to look as worn as his. Of course in retrospect those hands were the result of the hard work he performed and loved. Now that he is gone I think about his hands often in the studio when I am working with tools he left me. His hands and his laugh, mostly his hands.
Posted by Evonne Davis at 4:38 PM No comments: 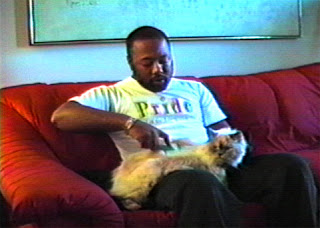 continuing the spread of this piece by Neil Goldberg
Posted by Emma Wilcox at 10:23 PM No comments:

Mark making is something I care about, as a reader and artist.

New Australian passports allow a third gender option, which is "X". My initial reaction to this was pleasure that at least one country in the world is doing something progressive. But my mind kept wandering to X as "blank" somehow conceptually. I also was thinking about X as a substitute, as in signing with an X, and leaving it as a variable. Evonne pointed out the X is the unknown.

On a humanistic and practical level, I'm thrilled about this new development and the only people whose opinion really matters, I think, are the bearers of such passports. But in honor of this news item I'm suggesting X as a totally open ended blog topic for the next month. 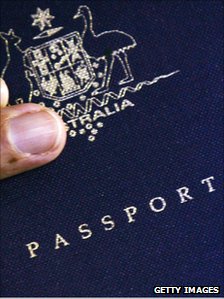 "Australians have been given a third choice when describing their gender on passport applications, under new guidelines aimed at removing discrimination.

Transgender people and those of ambiguous sex will be able to list their gender as indeterminate, which will be shown on passports as an X.

People whose gender was different from that of their birth were previously required to have reassignment surgery before they could change their passport to their preferred sex.

An Australian senator, Louise Pratt - whose partner was born female and is now identified as a man - said the reform was a huge step forward.

"There have been very many cases of people being detained at airports by immigration in foreign countries simply because their passports don't reflect what they look like," she told Australian radio.

Posted by Emma Wilcox at 5:32 PM No comments:


Run by artists, for artists, The Governors Island Art Fair enters its 4th year this fall as 4heads rally an exciting and diverse selection of artists from around the world. Well over 100 independent artists are selected entirely on the merit of their work and, once chosen, each is given a room of their own in which to create an exhibition environment of their own design. A selection of galleries are exhibiting in the Fair as well and, this summer for the first time, 4heads are also offering art workshops and artists' studio residencies beginning in June. For more information visit www.4heads.org. 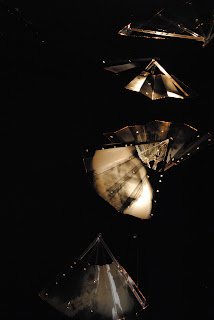 Naomi Campbell created a beautiful arch of fans.  The imagery on the fans revealed itself to me after a few minutes of standing amongst them.  Her installation is even more dramatic in person than in the photograph. 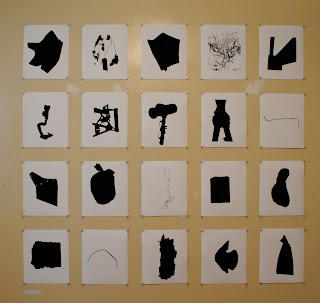 Andrew Harrison referenced the history of the area.  The shapes were collected during a walking tour of Manhattan.  You'll have to visit to hear the sound component! 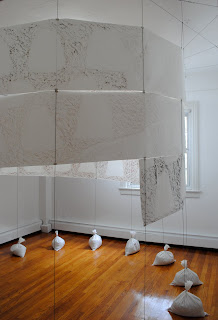 Einet Imber created a beautiful cave drawing that you can view from inside or outside. 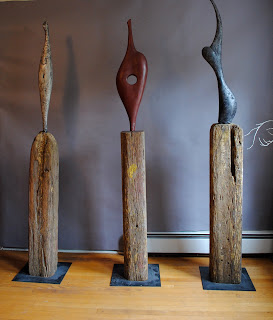 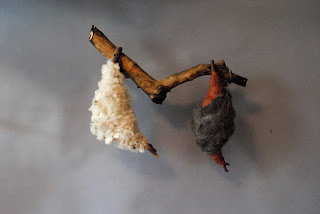 Although Molly Sawyer's sculptures are rather simple shapes, they are able to capture so much emotion.  She uses a lot of natural materials, sheep wool, wood, moss, I love her pedestals.  Her studio is in Jersey City so be sure to check it out during open studios while you're visiting Aferro! 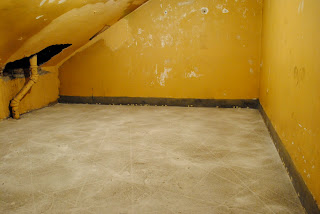 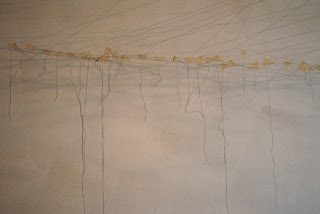 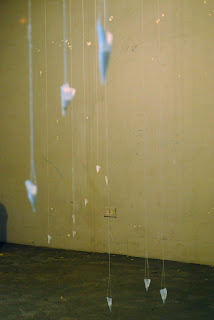 Here are some images from my attic space.  The buildings on Governors Island haven't been used in years and as a result, paint is peeling, there are stains and some rooms have torn up floor boards.  I was particularly pleased with the character of my three little rooms.  I wonder how the salt and the thread will change over the coarse of the month.

Open Culture is a great compendium of free educational/culture links.
I spent a lot of time (too much?) on it tonight. Here's two that I liked a lot.
Way back in 1963, Jerry Gretzinger began making a map of his imaginary world.
and
Terry Gilliam's intro to animation.