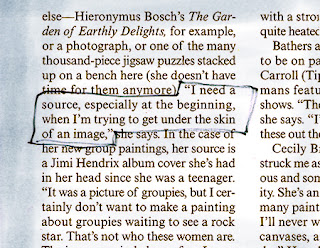 When the February 2013 print issue of US Vogue Magazine was released, it included a piece on the British painter Cecily Brown.  On page 259 there was a statement by Brown that struck me.  So I marked it with a pen. The quote is above.

Being a painter too, I can begin to understand what she meant.

From what I know of her work, sexuality and attraction are dominant themes. This implies the human figure, the other most striking visual presence in her work.  Whether darkly concealed, smothered, or surfacing in gooey, slippery and kaleidoscopic landscapes of oil pigments –landscapes that eventually come to form as recognizable places like a forest or a bedroom- the nude body or bodies emerge, by itself or moistly intertwined with another, in justified repose or intimate pose.

With such overt and unapologetic sexuality in her paintings, at first it seems that it’s no surprise that Brown mentions the word "skin" in the interview. But it must be more than that: such as the idea of skin as an analogical device or formal metaphor upon where the meaningful viewing, necessary entanglements and deep comprehension of artworks bank their premises on.

A favorite art professor of mine once wrote: “painting’s analogy to skin is not new.”  It sounds like a good place to start reconsidering Brown’s quote.

18 square feet –that is the measure of the skin of our bodies.  It is our body’s largest sense organ.  It is also the sense organ that is always on, in a “constant state of readiness to receive messages.”[1] It is also the outermost boundary of our body.  If put into analogy with our planet, our skin would be the Earth’s crust: it covers the entirety of the planet, it is the last place of contact when leaving the Earth, it is the first place of contact when meeting Earth.  But the Earth’s crust is extremely thin- it amounts to less than 1 percent of the planet.  Whereas skin amounts to 16 percent of our body weight.  This attests to skin’s significantly concrete presence.

And so I cannot help but find a beautiful yet uneasy dance between the words “skin” and “image” in Brown’s quote.  To “get under the skin of an image” feels like the equivalent of watching polar opposite creatures having a love affair that is destined to die.

Image amasses its power in its elusive, shape shifting, and opportunistic nature.  It defies being exclusively possessed by anybody or anything whether by time, place, entity, language, idea, cause, or even by its object (if there ever was one to begin with!). Whereas skin is simply possessed by one body.

The breadth of image’s reproducibility is infinite.  Skin can only venture, well, skin-deep.

The image is the flawless and timeless ideal that embodies desire.  Skin is flawed, rife with fissures, and is in agreement with time's conditions.

To try to “get under the skin of an image” can only mean subjecting the image into an embodiment that it is not constructed to be, and implicating the skin into giving the image a surface that will only render it penetrable.  What is exciting about Brown’s quote is the violation of image and skin’s established conditions. 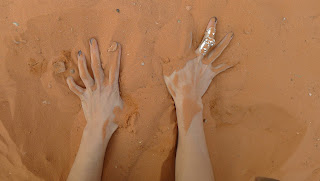 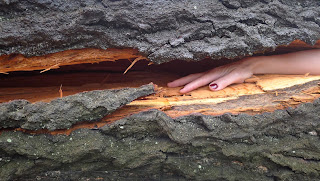 It is with this quote in mind that I am rethinking my series of photographs taken in certain natural environments in the Southwest and Northeast.  In it I photographed my hands gouging through sand, grazing through snow and sleet, grasping boughs, channeling through gashes in fallen trees, stroking the furrows of petroglyphs.

As if my lived and sensory experiences of canyons, deserts, forests, snowstorms, and hurricanes aren’t enough to establish my sense of awe and wonder of nature’s otherness, I physically entwine my hands into the matter that contain, shape and define these places- and then photograph these acts!   I am reminded of Thomas the Doubter who needed to touch the wound of the resurrected Christ in order to eradicate his doubt and establish belief in the resurrection.