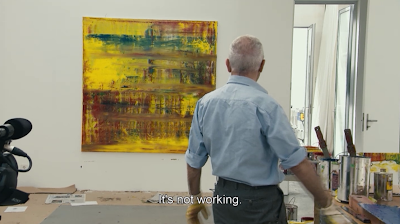 
It is uttered by Richter after the moment pictured in the film still.  After minutes of pondering the painting in question, the filmmaker Belz asked him if it is because of the blue- to which he replies yes.

Richter is not alone in uttering this.  It is a deep but chronic sigh that is emitted from time to time in the studio of every painter.  These sighs are the painter's announcements that he or she is recognizing a sizable formal or conceptual conflict internal and external to a given painting.  Presuming that these conflicts are upon which the painting's ability to hold itself together depends on -and perhaps  conflicts for which the painting was undertaken - sighs are the decisive moments that are either followed by the painting's (or even the painter's) continuation, undoing or end.

Fortunately, since it is a chronic utterance, time eventually allows painters to develop strategies on how to deal with these interruptions to their practice.  From my painting mentors/professors I learned to appreciate that when face-to-face with such a moment, I can consider to: A) just keep on painting; B) try another medium so your expectations are suspended; C) go back to that breakthrough moment.

It is this morning that I'm pondering the third one, C -going back to that breakthrough moment.

It's not because it is the most effective strategy, but because of its romance.  And it's not just because painting is already tied to notions of the Romantic, but because just the word "breakthrough" evokes energy -an overt, heroic and outward energy: the energy to grow, advance and discover. At the same time it also evokes a more subtle inward energy: the energy at the beginning of something, of one's origins.

My last reason is because the idea of "breakthrough" was just confirmed in this attached TV episode of Mad Men. I was watching it together with the Richter Painting film this morning.  In this episode, model-turned-housewife in the 60's Betty Draper instills to her 8-year-old daughter a lesson on the virtues and consequences of the first kiss. 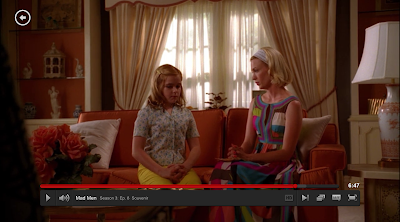 Betty (to Sally): "…The first kiss is very special… It's where you go from being a stranger to knowing someone.  And every kiss after that will be a shadow of that kiss."


As much as it made poetic sense in the dialogue in the TV episode, it seemed to also do the same to the painting practice.  All I needed to do was make the word substitutions appropriate to this discussion in painting:

With the substitutions applied, Betty's lines would be:


"...The crucial brushstroke is very special… It's where you go from being unsure to knowing painting.  And every brushstroke after that will be a shadow of that brushstroke."